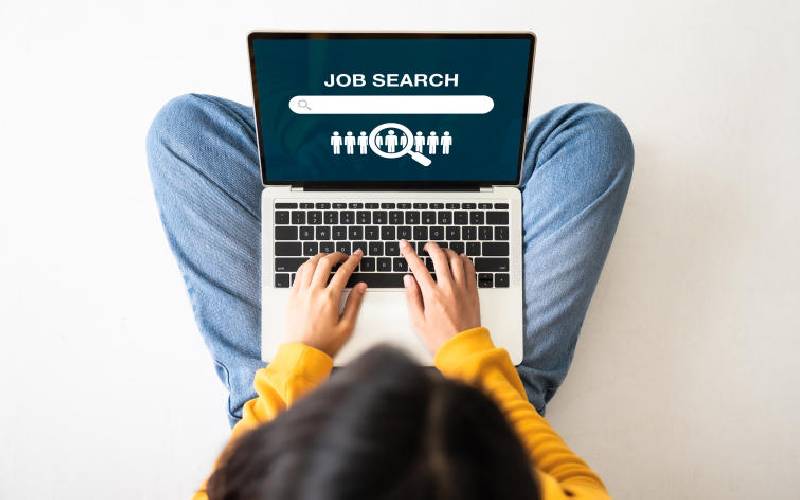 He had graduated from a major local university in 2015 with a degree in animal science, but was unable to land a permanent job after a series of internships.

In the days leading up to his death, Ishmael was reportedly frustrated and called on some of his friends to apologize for any wrongs he may have done to them.

“He was my friend,” said Winfred Wangui, a Nairobi-based veterinarian.

“It was so sad because I felt he had a very bright future. He was frustrated; he hadn’t been registered with the vet board and couldn’t get a permanent job,” Ms Wangui added. .

William Wachira is another frustrated youngster. But, unlike Ishmael, he hasn’t let shortcomings in the local labor market get the better of him.

Mr. Wachira turned to web development after failing to secure a job to match his training in supply chain management at the Siaya Institute of Technology.

When no job presented itself after leaving college in 2019, Wachira tried his hand at various odd jobs including working as a car broker before deciding to take online courses in web development.

“Job hunting has long been a full-time job,” he says. “I was a motor vehicle broker, but it was not sustainable.”

Getting into web development has since paid off as he designed and developed major projects such as the jb-stores.netlify.app e-commerce platform last year.

Ishmael and Wachira represent millions of young people in the country unable to gain a foothold in the formal job market amid a worrying unemployment crisis made worse by the Covid-19 pandemic.

The latest quarterly report from the Kenya National Bureau of Statistics (KNBS) shows that in the first three months of 2021, the number of unemployed graduates remained at a worrying level.

“Ages 20-24 and 25-29 continued to record the highest proportion of unemployed at 16.3% and 9.1% respectively,” reads the Kenyan Comprehensive School Health Program report ( KCSHP) of the KNBS.

The KNBS had, in its 2019 census, found that the number of those attending mid-level technical or academic institutions was around 500,000, and 471,000 those attending universities.

That year, universities across the country released about 30,000 graduates.

Data on young people not in education, employment or training (NEET) for the first quarter of 2021 was highest in the 20-24 age group. Many graduates fall into this age group.

KNBS data shows that as employable people age, they are more likely to find a job.

This is mainly due to companies’ preference for experience rather than academic qualifications. According to the BrighterMonday Kenya Employee Satisfaction Report 2021, 53% of employees aged 18-24 were satisfied with their employer.

But only a fraction of those seeking employment in both categories were lucky enough to be hired. Monicah Karanja, human resources and administration manager at Octagon Africa, said younger employees are more likely to change jobs than their older counterparts.

This may explain the reluctance of employers to hire them. “Many of these young people have little to lose. When you consider someone just above 18, it is most likely someone who has just graduated from high school or taken a degree course,” Ms Karanja said.

“These are first-time employees and there’s nothing stopping them from trying new things.” Employers are fond of people between the ages of 25 and 35, according to Karanja.

They are young and energetic people with a year or two of work experience.

They’re more likely to take their jobs seriously because they’re at an age where they’ve started taking on responsibilities, like paying bills or caring for their own families.

“You will realize that at this age they have children and have generally started making crucial decisions that will anchor the rest of their lives. At this stage, work has more meaning for them,” Karanja said.

They are unlikely to leave their job without a good reason, given the difficulty they may have had in getting their first job, which makes them fearful that they may not get another immediately.

The age bracket between 36 and 45 is the most attractive for employers, according to Karanja.

This is made up of employees who have relevant experience, have children in school and therefore have a clearer objective and are thinking about career development.

“They are serious, mature and settled people, responsibilities outside the workplace make them better employees,” she said.

“They are now thinking about pensions or paying their mortgages and looking more than anything for job security.”

Some of them are in leadership positions and have already tasted the thrill that could have lifted them earlier in their careers. They are so settled and unlikely to move as much as their younger counterparts.

Some of the courses offered locally were not immediately marketable, so many young people had to retrain to fit into a growing gig economy. This writer asked one of these people if she knew a young person who had graduated and who was doing a job whose requirements were completely different from his qualifications.

“Is there anyone doing anything related to their course?” she replied, alluding to the fact that there is a skills mismatch in the country.

Over the past two years, the economy has shed jobs, with Covid-19 putting some businesses under pressure. Official data showed the economy lost 737,500 private and public sector jobs in 2020.

However, a slow economic recovery has created optimism. In December, the World Bank said overall economic performance is expected to be robust at 4.9% in fiscal year 2022-23, similar to the pre-pandemic pace.

Yes, Brian Flores has a job, but the NFL is unclear with its hiring practices - The Undefeated