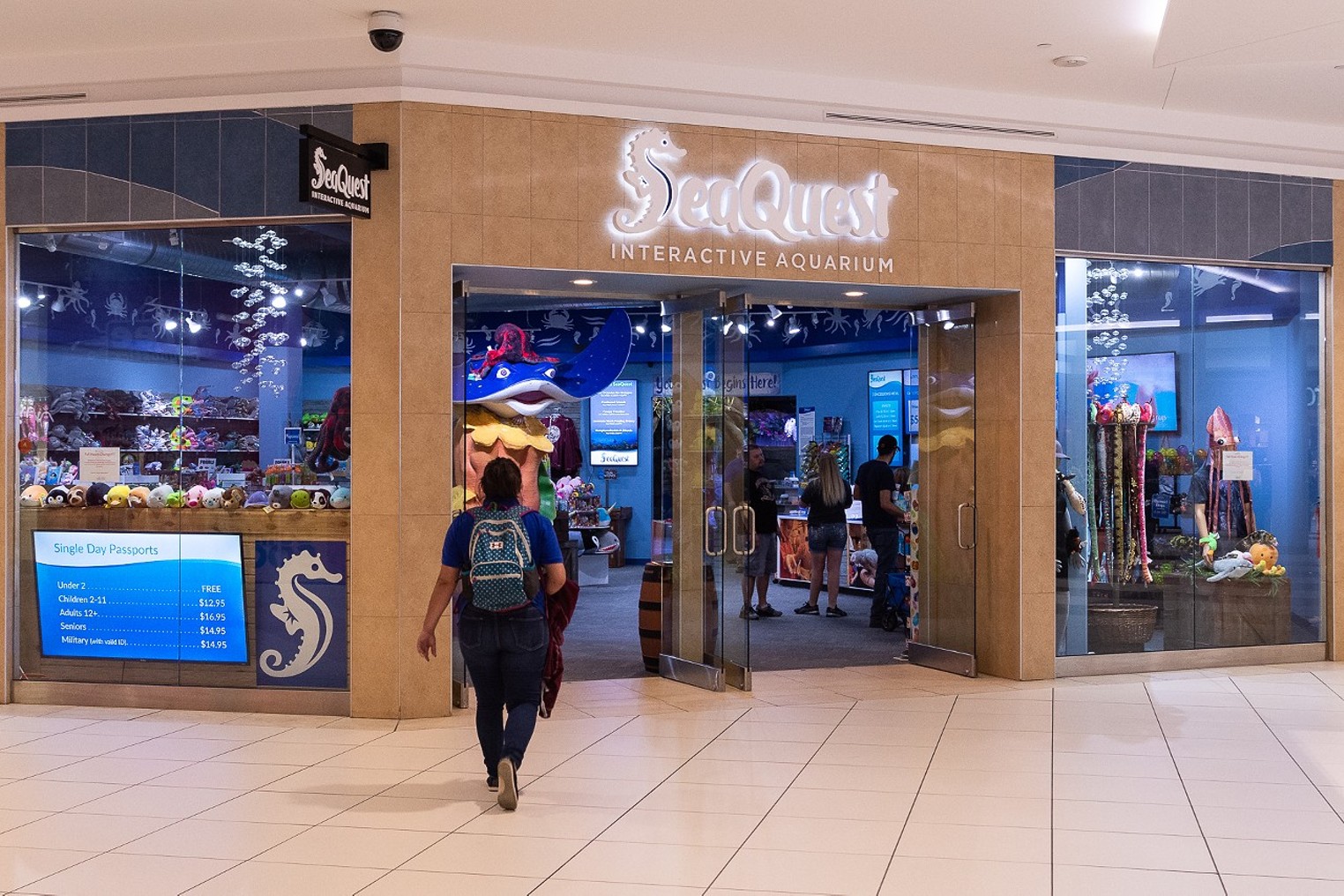 In addition to the Downtown Aquarium, Metro Denver has another water attraction that has also been engulfed in controversy. But SeaQuest Littleton may be turning the tide, thanks to a new license from the Pet Animal Care Facilities Act (PACFA) program, created by the Colorado legislature in 1994 and administered by the Colorado Department of Agriculture.

SeaQuest Littleton, which is located inside Southwest Plaza, bills itself as an interactive aquarium that aims to provide guests with the opportunity to touch and feed aquatic animals as well as mammals and birds. But it has made several missteps in recent months, and its owners are still inundated with complaints.

SeaQuest Littleton is part of a chain of SeaQuest aquariums across the country. Owned by Vince Cavino, the company has a record of animal abuse and illegal activity; Vince’s brother, Ammon, was convicted of illegal wildlife trafficking before helping open SeaQuest locations in Las Vegas and Layton, Utah. In 2013, 200 animals died in three months at the now-closed Portland Aquarium, which was owned by the brothers. According to a death journal obtained by The Oregonian.

SeaQuest Littleton got off to a rocky start when it failed to obtain the proper permit to house birds from PACFA before it opened in May 2018. On July 23 of that year, the CDA ordered it to cease operations. . The company sent its thirty birds elsewhere and managed to stay open because it still held licenses for the other animals.

In May 2019, however, Colorado Parks and Wildlife suspended SeaQuest’s remaining state license — but not before the facility reported more than fifty injuries to staff and guests. The CPW license only regulated some of SeaQuest’s species – and these have been removed and replaced, allowing exploitation to continue unlicensed simply by having no regulated species on site.

But the problems didn’t end there: In September 2019, the facility’s bird, reptile and mammal manager was charged with animal abuse for failing to seek treatment for a two-burnt sloth. times in a month.
“We obviously had some issues with the due diligence when it came to allowing animals,” says Kelly Bistriceanu, national marketing manager for SeaQuest, who was not with the company in 2019.

SeaQuest Littleton has learned from these issues, she adds, and is currently working to maintain as much communication as possible with PACFA and Colorado Parks and Wildlife.

According to Nick Fisher, section chief of the PACFA program, in 2019 the state could only regulate birds on the facility. Since then, PACFA has added a Commercial Pet Facility License that allows it to regulate all SeaQuest species that are not considered wild animals.

This license was created because PACFA noticed several installations like SeaQuest that needed monitoring but did not fit any of its license categories. “The definition of a commercial pet facility is a facility used for recreational, athletic, or exhibition purposes,” says Fisher. “It was just a way of putting these facilities in a more appropriate category.”

SeaQuest applied for the new license last August and its application was granted. As a result, PACFA now oversees the facility’s iguanas, fish, and birds; these species represent most of the animals in SeaQuest’s care.

Shortly after SeaQuest opened, Anna Bulanova was able to feed the Rainbow Lorikeets with nectar.

Colorado Parks and Wildlife previously regulated SeaQuest Littleton due to sloths, capybaras and a few other species, but Travis Duncan, a public information supervisor at CPW, says his department hasn’t regulated the facility for a few years. . However, internal emails acquired via a CORA request indicate that there was ongoing communication between CPW and SeaQuest regarding the monitoring of numerous animals, including sloths, various species of turtles and crayfish.

“We quickly follow up and keep in touch, ask questions, maybe communicate too much rather than, you know, assuming we know what we’re doing,” Bistriceanu says. This willingness to communicate led to the company receiving a citation for possession of multiple state-regulated species in September 2021. David Slater, managing director of SeaQuest Littleton, had contacted CPW in August to inform the agency of his intention to carry a Russian tortoise. Internal CPW emails indicate that Slater’s email made CPW understand that SeaQuest had restricted species, including the turtle, in its possession.

SeaQuest moved the turtle and sent CPW an inventory list of every animal in their possession to ensure there were no further issues. But there was: CPW asked SeaQuest to remove other state-regulated species from the facility, including a painted turtle, yellow-bellied slider and ocellated skink.

Accordingly, SeaQuest has implemented an internal policy for SeaQuest Littleton. Location is now specifically required to get CPW permission when adding new species to prevent further issues. But the issues surrounding the snapping turtle situation are not yet resolved.

SeaQuest Littleton reapplied for a zoological license through CPW in September 2021. According to Bistriceanu, because SeaQuest Littleton did not contest the charge of illegally buying the snapping turtle, they received points against their potential license, like she was getting points for a driver’s license. . Once CPW has set a time, Slater will appear in front of a CPW board to explain what happened, and CPW will then rule on the impact of those points on SeaQuest’s ability to receive the new license.

The last PACFA inspection report showed that the facility was in compliance with PACFA regulations. Fisher notes that other states, such as Florida, have much less strict rules regarding the pet trade.

Under the Animal Welfare Act, the United States Department of Agriculture regulates any facility with warm-blooded mammals. But while SeaQuest is licensed by the USDA, the agency only oversees some of the species there, and none of the fish, birds or reptiles. The USDA has not taken any enforcement action on a SeaQuest facility since 2019, although it issued a citation to SeaQuest Littleton after a wallaby drowned there in 2020.

Despite the relatively clear record, People for the Ethical Treatment of Animals sent a letter to the USDA on January 12 asking it to terminate SeaQuest’s Animal Welfare Act license. PETA filed a similar request in September 2019 — partly because of violations in Littleton, but also because of issues elsewhere. This PETA complaint follows the illegal purchase of the snapping turtle by SeaQuest Littleton.
Michelle Sinnott, associate director of captive animal law enforcement at PETA, said the organization has been concerned about SeaQuest since the first location opened in 2016 because of the Cavino brothers’ story. “It’s not the first time this place … has gotten into trouble for treating animals like commodities, treating them like products to be displayed for profit,” Sinnott said of the turtle incident. serpentine.
The USDA did not respond to PETA’s letter. According to Sinnott, if the USDA doesn’t terminate SeaQuest’s license now, PETA hopes the company’s license won’t be renewed after it expires later in 2022.

According to Fisher, however, the company has changed things up at SeaQuest Littleton. “From a regulatory perspective, it’s really difficult, because SeaQuest’s goal is to be an interactive aquarium,” says Fisher. “That poses challenges for a regulator like us or Colorado Parks and Wildlife because when kids handle animals they tend to get hurt and also for kids to hurt themselves.”

Fisher says PACFA worked with SeaQuest to minimize interaction between people and species that might be aggressive, such as water monitors, a type of large lizard. PACFA also demanded that SeaQuest own fewer animals.

Fisher’s optimism is not shared by PETA, and that organization is asking the public to stop visiting SeaQuest sites. “Enough is enough for this company,” Sinnott says. “It’s important for the public to know that your ticket is what allows this company to exploit animals.”

But Bistriceanu says the company is doing all it can to ensure the animals it cares for are treated well. “SeaQuest, the world’s fastest growing zoo-aquarium concept, is naturally at odds with an organization like PETA, which upholds the motto ‘Death Before Captivity’. Conversely,” it notes. she, “SeaQuest strives to save and save the lives of animals by providing them with a home where they receive an expert level of care.

You can now turn off Google Assistant with just one word