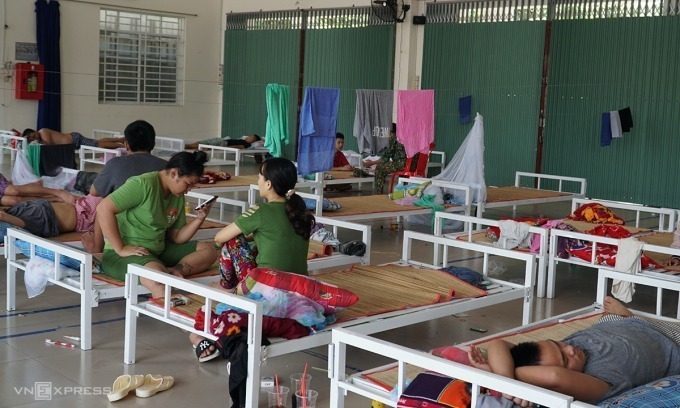 Unfortunately, there are plenty of takers for such too-good-to-be-true deals.

Recently, many cases of human trafficking and debt bondage in Cambodia have come to light, the most dramatic being the escape of 42 people who escaped from a casino last month. They swam across the Binh Di River, the natural border between Vietnam and Cambodia, on August 18. Forty made it, one was captured and one teenager drowned.

Authorities say there may be thousands of people who were deceived and trafficked in Cambodia, ending up as bonded laborers. They are held against their will on promises of settlement and do not receive the wages or working conditions they were promised.

Cambodia recently received offers from Vietnam and nine other countries to cooperate in the fight against human trafficking.

According to the Vietnamese National Committee for the Prevention of Human Trafficking, from the beginning of this year to August 20, 865 victims have been rescued.

The Cambodian Interior Ministry has confirmed that victims are persuaded to travel to Cambodia with promises of “easy jobs and high salaries”.

However, when they arrive in Cambodia, they are shocked to learn that the jobs are not what they imagined. Every day they are forced to go online and trick people into pouring money into illegal online games.

VnExpress contacted a broker, whose Facebook post indicated that a company near the Moc Bai international border checkpoint was looking for Vietnamese workers. The broker promised many benefits.

“The company will support you. When you arrive at the Moc Bai border checkpoint, I will call the administrative staff of the company to pick you up there. Your job is to invite people to play games. games on its site,” the broker said.

Asked about recent cases of human trafficking in Cambodia, the broker replied, “This company is not like that. I have been in Cambodia for almost two years and what I have seen is different. Only if workers create trouble will they be punished by security. The 40 people who swam across that river probably worked for a ghost company,” he said.

The broker promised that the company he was recruiting for would allow workers to go out freely. If a worker wanted to quit his job, he only had to send a resignation form to the employer one month before.

“They’ll pay you the rest of your salary and then you can leave,” the broker said.

That’s what Diep and Chu, among the 42 people who escaped from a casino in Cambodia, were told by brokers.

“I learned about the position through a recruitment post in a Facebook group, which stated that a company was looking for Vietnamese to work in Cambodia. It required candidates with basic computer skills to work 8-10 hours /day with a salary of 25 VND-30 million. The company would cover accommodation and transportation costs,” Diep said.

“They said I would work in an air-conditioned office and my salary would be VND25 million per month. I was unemployed, desperate to find a job,” Chu said.

Diep said his broker’s Facebook account appeared to be a normal account that a human resources staff would have. To convince her, the broker sent her photos of an office where employees were doing their work on computers.

“I saw the pictures and I believed him,” Diep said.

She didn’t have a passport, but she was still asked to go to Cambodia. From the province of Bac Ninh, the young woman went to the city of Chau Doc; then to Long Binh city, An Giang province.

“When I got there, a Vietnamese woman was waiting for me. She took me on a trail, then we crossed the river on a boat. That’s when I realized I was crossing the border illegally .

“The boat was not big, it was an old wooden boat. I wondered why they hadn’t taken me to a border post. I wanted to turn back but they reassured me: it’s fine, your office is just on the other side people went this way and they didn’t get caught, they said.”

When she arrived at the casino, she realized that her colleagues were all Vietnamese and had also crossed the river like her.

Chu said many Vietnamese were brought to work in Cambodia even after arriving there legally.

“Some people came here by plane, others went through border checkpoints. Some arrived in Phnom Penh and then ended up working in casinos near the border,” Chu said.

According to the Vietnamese Ministry of Public Security, the criminals are very sophisticated operators. Instead of meeting victims in person, they approach job seekers through social media. They even give Vietnamese workers money in advance to build trust. They direct people to border checkpoints and then guide them to follow the lanes.

Officials say these cases are mostly occurring in economically disadvantaged provinces, such as the northern and southern border provinces and the central highlands. The victims are mostly poor people, including teenagers, and even university students looking to make a quick buck.

“I was given a computer and 4 Iphones. My employer, who was Chinese, said my job was to chat and talk to men to invite them to play online games on the company site” , says Diep.

“When I was in Vietnam, they only said that I would work for an online gambling application. No details were given. When I arrived there, I understood that I had to deceive my countrymen. I had to trick people into putting their money into the app,” Chu recalled.

After working at the casino for a week, Diep’s working hours went from 8-10 a.m. to 12-14 a.m. days. When she asked the employer for permission to leave early, she was reprimanded.

After the first month, she was paid $200; but in the months that followed, she received almost nothing. They said her salary was garnished because she didn’t meet the quotas.

Chu said they were told that if they wanted to leave, they would have to contact their families and pay ransoms of over $3,000.

When some workers called their broker for help, the latter seemed to have disappeared.

“When I was in Vietnam, I could easily contact my broker. After a week in Cambodia, I lost contact with him,” Chu said.

On August 22, a spokesman for Cambodia’s immigration department said investigators had arrested the Chinese manager of the casino from which 42 Vietnamese fled.

The manager admitted to forcing the Vietnamese workers to work.

Police in An Giang province have temporarily arrested two suspects, Nguyen Thi Le and Le Van Danh, to investigate their role in organizing a smuggling ring.

According to the Ministry of Public Security, in the first six months of this year, Vietnamese police coordinated with Cambodian authorities to save more than 250 cases of people who were tricked into working illegally in Cambodia.