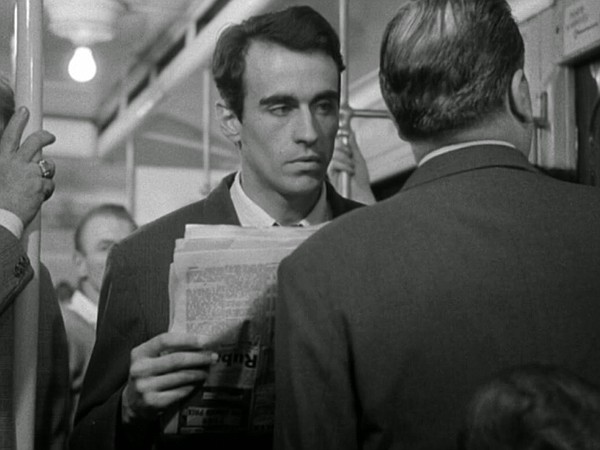 We watched Robert Bresson’s “Pickpocket” (1959) the other night.

It’s a simple film, more adjacent to the French New Wave than really a part of it, and it seems to be loosely based – or perhaps inspired – by Dostoyevsky’s “Crime and Punishment”. And if you break down the plot, it’s the same as in the Russian novel: a man breaks the law, is caught and sent to prison, where his misery is relieved by the love of a good woman.

Like Raskolnikov, Michel finds himself in need of money to live on and believes that there are superior people who should be exempt from the law due to their potential contribution to society.

But while Raskolnikov commits a truly monstrous act – he ax murders an old pawnbroker who stores cash and valuables in his apartment – because he thinks the windfall will free him from poverty and will allow him to achieve the greatness that is destined for him, Michel is an ordinary petty thief. , living on subsistence by committing crimes of opportunity.

Michel is great only in his rhetoric. He is neither Nietzschean uber mensch nor monster, only pathetic. He’d better get a job than live from risk to risk. His crimes are petty, insufficient for his ambition.

Everyone knows that if you’re going to fly, you gotta fly big. Otherwise, you end up in jail.

Not all great fortunes may be based on great crime, but let’s not forget the business advantages that criminals enjoy.

So, if you want to succeed in business, one of the ways to advance is to become a criminal. Not necessarily the kind who robs people at gunpoint or smashes windows to seize goods – these unsubtle criminals are often caught and punished – but to become the kind of criminal people envy. The kind of criminal who traffics in dreams and relies on the unfulfilled desires of others to further his own grand designs.

The kind of criminal who, if ultimately successful, could be considered a captain of industry or master of the universe, or at least excused as a rare and superior creature, a genius to whom no law should apply .

The kind of unicorn they could make a prestige TV drama series out of. (“Unicorn” is apparently a term of art in the tech industry that refers to a private start-up company valued at more than a billion dollars. I use it in the more general sense of a very rare individual endowed with magical powers. They don’t exist, by the way.)

Right before watching “Pickpocket” we saw the final episode of Shonda Rhimes”https://www.arkansasonline.com/news/2022/apr/24/vicarious-pleasures-dramatic-license-will-be-taken/ “Inventing Anna” on Netflix in which Julia Garner, better known in some circles as Ruth of “Ozark”, plays Anna Delvey, whose real name is Anna Sorokin, a fake German heiress who defrauded hotels, banks , air services and human beings.

We’re not quite done with the Showtime series “Super Pumped,” which stars Joseph Gordon-Levitt as former Uber CEO and ugly boss Travis Kalanick. The series is based on the book “Super Pumped: The Battle for Uber” by Mike Isaac.

We also watched “WeCrashed,” in which Anne Hathaway and Jared Leto star as Rebekah and Adam Neumann, the entrepreneurial couple who were instrumental in launching and crashing space provider WeWork. of physical and virtual coworking.

WeWork is still around, and although Adam is no longer CEO, he received $1.7 billion for his stake in the company when he left the board, and still receives an annual salary of $46. million dollars as a consultant to the board of directors.

We didn’t see Amanda Seyfried as Theranos CEO Elizabeth Holmes on Hulu’s “The Dropout”; it’s on the short list.

These shows are all based on true stories – fictionalized to some degree – and are about horrifying people that many look up to. Or maybe we should say that the characters are portrayed as people who do and say horrible things. It’s important to remember that while we may have read about real-life analogues of these characters in the newspapers and seen stories about them on television news programs, the people who produce and write these shows don’t have no obligation to “the truth”. — they want to produce a hit TV series, and to that end, some of them are willing to be as ruthless and callous as they show.

Artists must be prepared to hurt people’s feelings and distort the world in the process of expression; at some point, it becomes debatable whether a particular dramatized conversation actually happened. You have to give your audience credit for being adult enough to understand that no one was actually in Adam and Rebekah’s room taking notes. None of these series claim to be anything more than headline-inspired speculative stories. A drama license will be taken.

The best reason to watch any of these shows is to be entertained, both by the lack of self-awareness of the characters and by the lively and sometimes nuanced performances of the actors.

There is no secret when it comes to making an unpleasant character charismatic: choose a charismatic actor in the role. While there’s a lot of pain in making Garner’s Anna Delvey look like the real Anna Delvey (and Garner nails both the dead fish sneer and the real fake’s curious accent), Garner appeals to our d in a way that the real Delvey’s clips don’t. .

Maybe it’s because she’s professional enough to allow an undercurrent of scared bunny vulnerability to bleed through the pose; it is more likely because it is more familiar to us than the real article. Part of the trick has to do with audience expectations; we look for the humanity in these characters – we’re nicer to them than we are to their real-world counterparts, who only exist for us in brief clips.

Delvey/Sorokin was able to simulate the lifestyle of a wealthy German heiress for almost four years, from 2013 to 2017, by pretending (and sometimes tampering with documents). Despite having virtually no money, she managed to convince hotels, banks and friends that she was essentially ‘good for this’ as she moved from a four-star hotel to a restaurant. exclusive, conveniently forgetting about his wallet while waiting for his trust. funds to start.

Obviously a lot of people allowed it because they thought there was a payoff to come. And while some of her actions were clearly criminal — she was convicted and served time and is now awaiting deportation — it’s hard to feel guilty for most of her “victims.”

“Inventing Anna” is a fiction. Although it’s based on the real-life story by journalist Jessica Pressler about Delvey for New York Magazine – much of what happens in the series happened after the story came out, and Pressler is fictionalized as “Vivian Kent” who works for Manhattan magazine. (Vivian is played by Anna Chlumsky, it’s still worth watching.) We have to understand that Pressler’s name was changed for a reason – I doubt she actually helped style the infamous fashion shows. by Delvey.

In “WeCrashed,” Hathaway bestows Rebekah Neumann with a strange, specific dignity that suggests something closer to damage than pathos. Leto – whose Israeli accent is incredibly accurate, despite what some Twitter users may think – is in some ways a more compact and manageable version of Adam (a much taller and more handsome man), but he brings to his characterization believable madness, an interesting hint of imbalance.

And part of our Gordon-Levitt delight as the remorseless founder of Ayn Rand and Uber is the obvious delight the actor (allegedly a truly gentle soul) takes in indulging in the savage fury of the Kalanick’s selfishness. 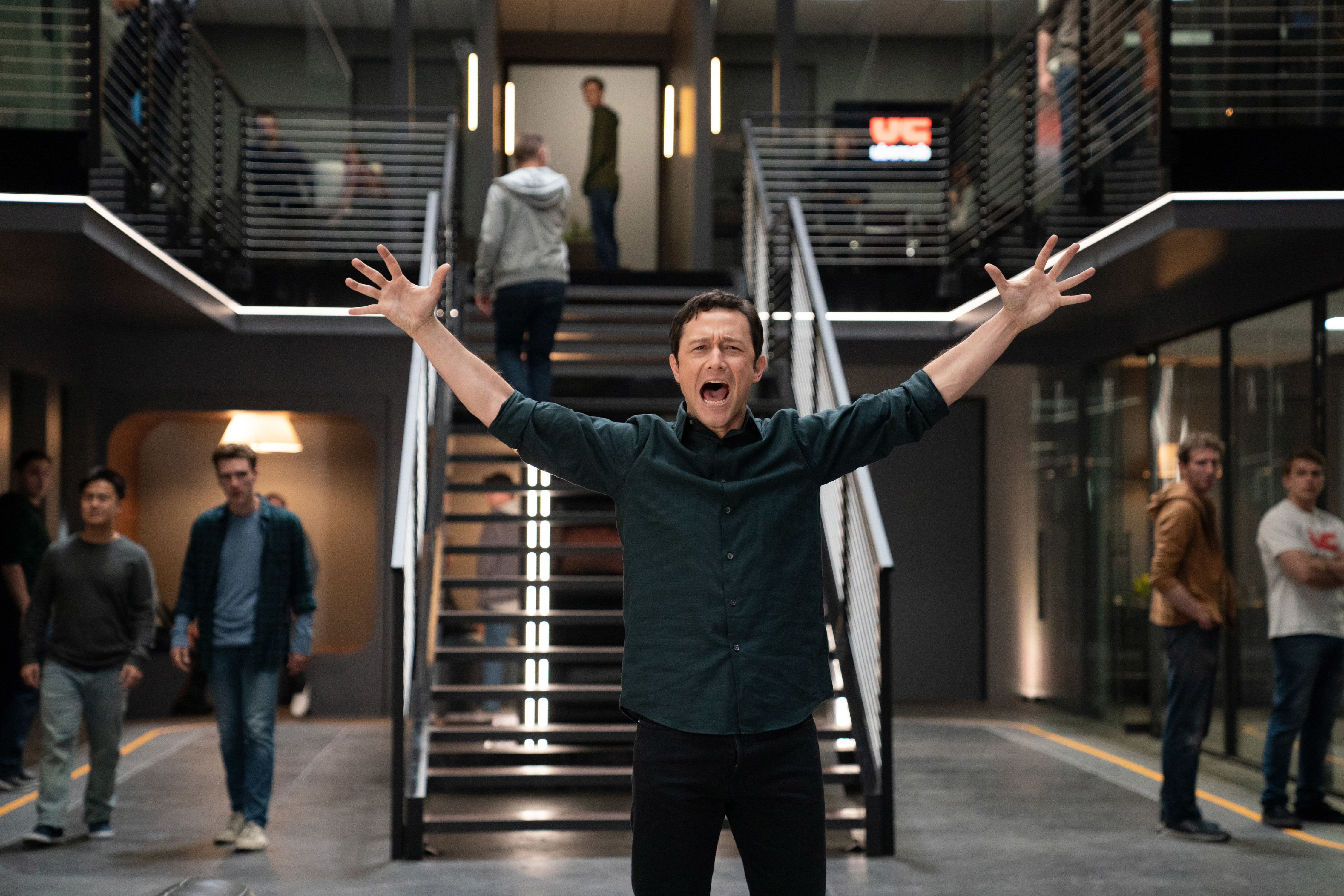 We watch these shows not because we want to know how the story ends – we already know that, and if we don’t we can always peek at a Wikipedia entry – but because they allow us the indirect pleasures of hanging out with these horribly empty people as they try to fill themselves with money and pretty things. And because we are given intellectual cover to consider their amorality.

Embedded in the title of “WeCrashed” is the idea that the Neumanns ultimately failed, but how big is the failure when you walk away with $1.47 billion and an extremely well-paid consulting job ? It’s only a failure if you consider what could have been, and the collateral damage to others.

Likewise, Kalanick is kicked out of Uber and “disgraced,” but he still has billions in the bank. Only Delvey, the bogus heiress who failed to complete the loan to fund her foundation, appears to be left in an unenviable position after the debacle.

And there are those who would point out that she should be able to monetize all those Instagram followers and “her struggle.”

Had she obtained that fateful loan and implemented her vague plans, would her origin story have become legend a few decades later? She would have faked it until she did, and there are plenty of fortunes built on blood and misery. Anna was just a trickster, an Icarus who flew too high.