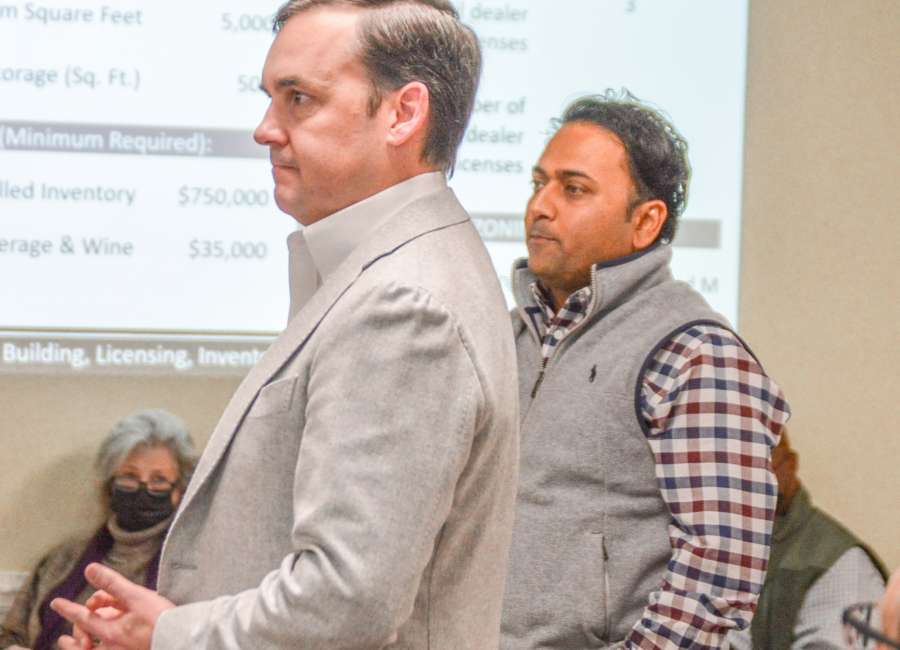 Cliff Sandlin, left, and Milan Patel have received the first liquor store license issued by Coweta County, for their store project at US 29 South.

The license was issued for a store that will be located on US Highway 29 South, near Interstate 85, near the former location of Huddle House.

Candidates Cliff Sandlin and Milan Patel spoke at the public hearing about their plans for the store – â€œBottoms Upâ€ – and its future development. The two have been friends since elementary school and can’t wait to give back to the community.

But a resident of Bethlehem Church Road urged commissioners not to approve the license.

Diane Williamson said she was very concerned about the idea of â€‹â€‹a liquor store in this area. “I’m just asking you to think twice before approving this,” she said.

Williamson said she was not a prohibitionist and was not against liquor stores, but she was against one in this particular location.

â€œI just don’t see it benefiting anyone except maybe the people who will benefit financially,â€ she said. “We have homeless camps there, we have drugs, prostitution, loitering … attracts disreputable characters.

Williamson said she and her husband wouldn’t even go to fast food outlets in the area because they don’t feel safe.

â€œPlease bring something that will improve the area, don’t make it slow down any further,â€ she said.

Williamson said she has researched the impact liquor stores have on a community when they enter.

She said she had heard of plans for a liquor store near the Poplar Road exit and combined with Grantville, meaning liquor stores three times in a row.

â€œIs this how we want our community to be known? ” she asked.

Williamson also took issue with the proposed name, “Bottoms Up”.

â€œDoes this sound like a healthy neighborhood, a community where you want to raise your kids and live? ”

Patel, who now lives in Albany, said he takes the school bus to that area every day because his parents worked in the hotel industry.

Patel said his and Sandlin’s goal is to develop something in this part of town that Coweta County and Newnan can be proud of. The master plan is to bring services, places to eat, stores and a grocery store.

â€œWe don’t think of ourselves as a liquor store, we think of it as a celebration store,â€ Patel said.

He said it was his personal goal, since he was 12, to revitalize this part of town. Originally a computer programmer, Patel said he fell into the real estate development business and was extremely passionate about making this part of Coweta County a success.

Commissioner Al Smith brought forward the motion to grant the license and the vote was unanimous.

Under the county ordinance, a licensee has 12 months to make the store operational; an additional period of six months can be added administratively. If the applicant needs more time, it can be requested from the commissioners.

In November, the Cowetans voted overwhelmingly to allow contract liquor stores in the county. The vote was made possible by a change in state law in 2021 that allowed local governments to call for a referendum to allow liquor stores. Before the law changed, the only way to get a referendum on liquor stores was to start a petition.

Ahead of the election, commissioners approved an ordinance to regulate liquor stores, if approved. Under this ordinance, only three active package liquor licensees are permitted in the county at a time.

The Bottoms Up application on US 29 was submitted just after 8 a.m. after the election was certified, said Joy Thompson-Brown, business licensing associate.