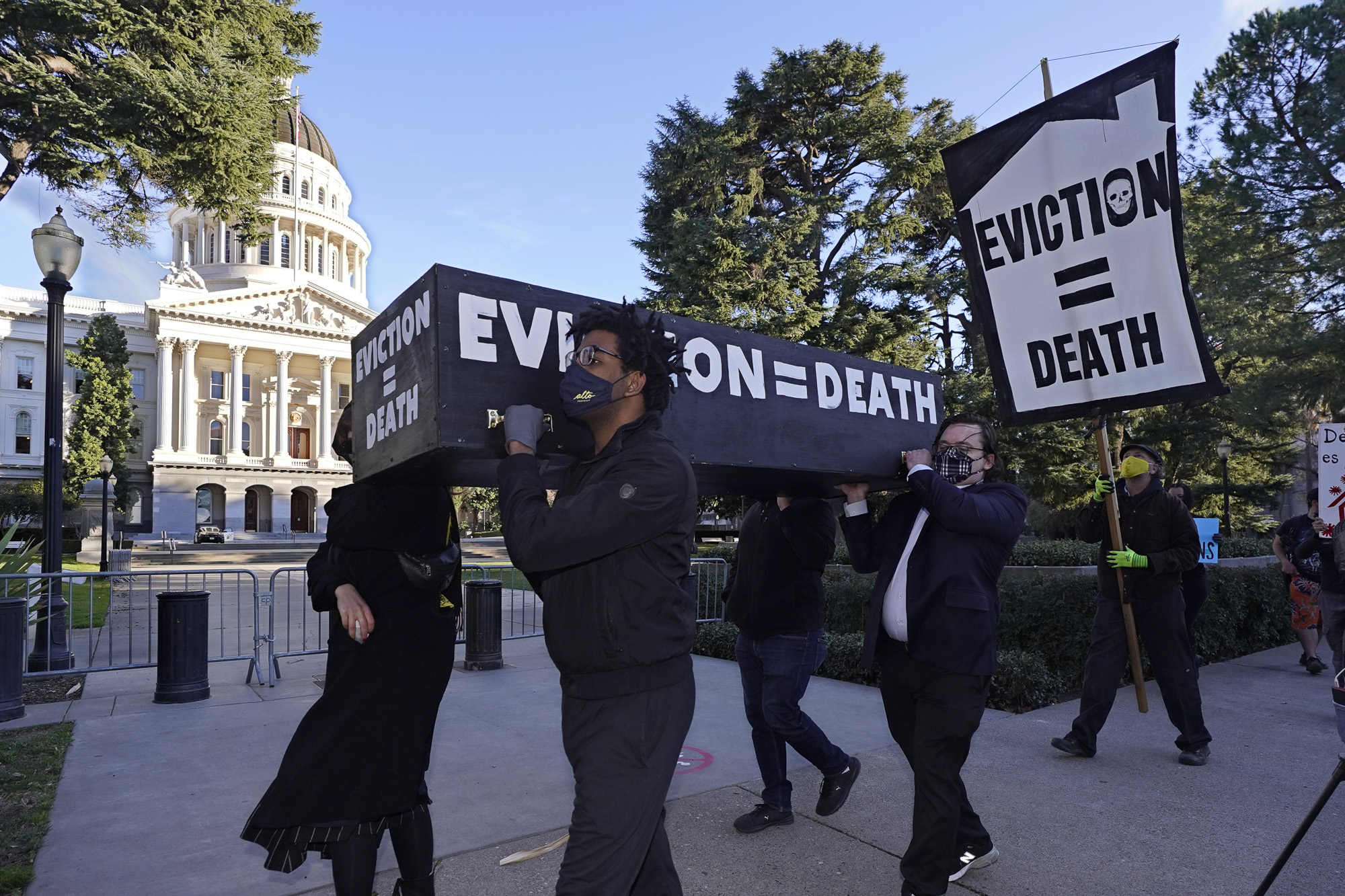 The state’s eviction freeze will likely be extended past June 30, and lawmakers could finish haggling over details this week. The big issues include how long the extension will last and how much rent relief will cover.

For the third time during the pandemic, California legislators have pushed off a huge, looming question to the last minute: Will the state shield tenants from eviction?

The answer, most likely, is yes, but for how long and under what terms is still up in the air.

As of Tuesday morning, several stakeholders told CalMatters they hadn’t yet reached an agreement.

Without a planned floor session Friday, the vote would now most likely occur on Monday — two days before eviction protections are set to expire, after June 30. That would mean putting a plan to paper by Friday at the latest, as bills need to be in print for 72 hours before they can be voted on.

Rental assistance is the key here: The state has been doling out $2.6 billion it’s sitting on at a snail’s pace, while figuring out what to do with an additional $2.6 billion from the federal government.

Since Gov. Gavin Newsom and the Legislature passed the last round of eviction protections in late January, the state has distributed only about $50 million of its $1.4 billion pot, and received applications for only about half of that money. While centralized data is unavailable for the cities’ and counties’ $1.2 billion share, there are similar reports of a slow rollout.

Key legislators are concerned about ending eviction protections before the bulk of those dollars have entered the pockets of the Californians who need it most, so they’re mostly hammering out new rules on eligibility and applications to make sure more rent relief gets out quicker.

“It doesn’t make sense to allow evictions, when there are still billions of dollars available that could prevent those very evictions,” said Assemblymember David Chiu, a Democrat from San Francisco who leads the Assembly Housing Committee and helped craft the original eviction moratorium last year.

But the deal-making to extend the eviction moratorium has been slow and secretive. Tenant and landlord groups told CalMatters they have been shut out of negotiations, which are taking place between Assembly and Senate leaders and the governor’s office — similar to the last two rounds of negotiations.

“Policymakers have been pulled in many directions, but I’m hopeful that the right conversations are happening, and we’re going to make progress before June 30,” Chiu said.

Here are some key decision points that will determine the fate of thousands and thousands of California renters:

How long will new protections last?

That question is at the heart of the debate. Tenant advocates want to extend protections for as long as possible, while landlord groups want the opposite.

Brian Augusta, legislative advocate for the California Rural Legal Assistance Foundation, said the tenant side has asked the state to tie the end date to distribution of all available rental relief funds — which at the current pace would take several months, at least.

“In my mind, it would be a travesty to end these eviction protections before we get every dollar out the door,” Augusta said.

Landlord advocates are concerned about the same issue, but want protections to end by September.

“We’d rather not have an extension at all, but we need to get the money out,” said Debra Carlton, executive vice president of the California Apartment Association. “That’s our number one focus. If that means a short, short-term extension, so be it. But the focus has to be on getting the money out.”

Carlton said members of the association — which says it represents more than 50,000 owners and property managers of 2 million units — sent 4,000 letters to legislators about landlords’ hardships during the pandemic.

The association is marshaling other resources, as well. On Tuesday morning, Beacon Economics published a report, commissioned by the association, that calls into question the need for extended eviction protections.The study says that the economic recovery is reducing late rent payments and unemployment among tenants.

“If you’re a low-skilled worker you have more job opportunities right now than you’ve had in 30 years,” Beacon Economics founder Christopher Thornberg said during a press conference.

“For more than a year, too many tenants with the means to pay have withheld their rent simply because they could do so without consequences,” Tom Bannon, the association’s CEO, said in a press release.

And in recent days, several landlord groups have been generous to the campaign opposing the recall of Newsom: Prometheus Real Estate Group, the largest owner of apartments in the Bay Area, contributed $100,000, according to a CalMatters tracker of  campaign contributions. The San Francisco Apartment Association PAC contributed $25,000.

Another point of contention: The association wants the law to protect from eviction only those who have applied and are eligible for funds, while tenant advocates want blanket protections that also cover those who have struggled to learn about and apply for the program.

Augusta, on the tenants’ side, is fearful that sunsetting the protections while the Legislature is out of session — between Sept. 10 and Jan. 3 — would mean no one will be around to reassess and fix the rent relief program.

Another timeline tenant advocates are pushing is to link protections to an improved economy with lower unemployment.

“The concept is: Do people have their jobs back? Because if people don’t have their jobs back, they’re not going to be able to pay rent,” said Shanti Singh, communications and legislative director for Tenants Together, a statewide advocacy coalition. “It’s not rocket science.”

While the state has now reopened and life in California is returning to normal for many, many employees in lower-wage sectors are still out of work. Last month, CalMatters reported California still has the nation’s second-highest unemployment rate and has regained only 48% of jobs lost amid the pandemic.

“While the economy is coming back, there are still millions of struggling families, and we need to make sure that they’re not going to be evicted while there’s still money available to help them,” Chiu said.

How much will rent relief cover?

The most recent round of rent relief allowed landlords to collect aid totaling 80% of unpaid rent through March 2021, as long as they forgave the rest. If a landlord turned down that deal, the tenant could collect 25% of the rent owed and have the rest of the debt relegated to small claims court.

Tenants have argued that the formula gave them the short end of the stick, should landlords choose to turn down the money. The 25% payment guaranteed only that a renter wouldn’t be evicted, but could still saddle them with debt.

In his May budget proposal, which legislators are now hashing out, Newsom called for state dollars to cover the full amount of missed rent — a proposal both the tenant and landlord groups have welcomed.

Newsom also suggested that money could go directly to tenants — as opposed to waiting until landlords accept the aid. That’s something the landlord groups are less than thrilled about.

“We think there will be huge abuse,” said Carlton, from the Apartments Association.

Chiu said the money could only be used to pay rental debt: “The two implications from that are: The landlord would not have to forgive any of that debt, and the tenant would receive coverage for everything that they owe.”

Under the current protections, tenants who had moved out to save on rent were ineligible for relief, because it was designed only to keep current tenants housed. Advocates are hopeful that will change in the new bill.

Another gaping loophole: Will people who took out loans from friends, banks, or payday lenders qualify for the money, as it isn’t a direct debt to the landlord? That remains to be seen.

Why has it taken so long to distribute rental assistance?

The existing moratorium laid out several ways the $2.6 billion would reach residents: The state would distribute it; cities or counties could do it themselves using the state’s rules; or the jurisdiction could distribute its share of federal dollars with its own rules, and let the state distribute the rest.

In all, the state was responsible for $1.4 billion. It has distributed a little more than $50 million to about 4,400 families, and received requests for about $616 million, according to data provided to CalMatters by the state’s Business, Consumer Services and Housing Agency.